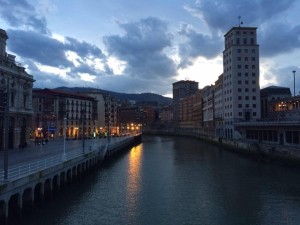 Last Sunday evening, I arrived back in Bilbao, Spain where I’ve been living and studying since the beginning of January after traveling for 16 days during my Spring Break. It was an exciting moment when I left the airport and headed to my apartment because I truly felt like I was going home, a feeling that many study abroad students never achieve while abroad.

My experiences abroad so far have been better than I could have ever expected. It only took me about two weeks to adjust to living in Spain and being away from my friends and family, and I have met so many amazing people while abroad. One of my biggest goals for my studies was to improve my knowledge of and ability to speak the Spanish language, which I have definitely been able to accomplish so far. With that said, I think part of me expected to come abroad and become fluent in Spanish by the end of the semester which I have come to realize is impossible; there’s so much more to the Spanish language than I realized and I still struggle to understand native speakers despite learning a great deal of Spanish since January.

In terms of academics, this semester has been different from all of my semesters at the University of Alabama which is due in part to the fact that I am attending a Spanish university and have all Spanish professors, and the education system in Spain (and throughout Europe in general) is different from the education system in the United States in many ways. Also, 4 of the 5 courses I am taking this semester are taught in Spanish and are either about the Spanish language or are about Spanish culture and civilization, whereas at UA I usually take almost all math and economics courses, given that those are my majors. Because of the differences in teaching style and content, my academic work has been much different than what I am used to; I’ve been forced to think differently as I am studying language, history, and literature as opposed to completing analytical work. Although there have been times when I wished I could just solve differential equations or complete statistics homework instead of doing my Spanish work, I think my courses have helped me develop in terms of my knowledge/understanding of the world and my ability to think more critically rather than analytically.

Outside of classes, I’ve had the opportunity to travel to different cities and countries during my weekends which has been a wonderful learning experience in itself. So far, I have traveled to France, Germany, Belgium, the Czech Republic, the Netherlands, Hungary, Italy, Switzerland, and of course Spain over the course of this semester. I absolutely love seeing and experiencing the culture in all of the different cities I visit, from food to language to religion to history… I have actually never particularly been a fan of history but I have found that I retain much more information about a city or country when I visit it and get to see the impacts of its history firsthand, and I am much more interested in history when I am able to do so as well.

Overall, I could not have asked for a better study abroad experience so far. Sadly, I only have about 4.5 weeks left until I finish classes and fly back to the United States. Going home will be a bittersweet moment for me because I absolutely love Bilbao and I could definitely see myself living here for much longer so it’ll be incredibly difficult to leave, but I am also incredibly excited to see my family and friends from home. There are some things I miss about the United States that will be comforting to go home to, just as there are things about Spain that I’m sure I will miss when I fly back to the United States… I’ll most-likely address those when I blog in a few weeks, after I’ve adjusted back to life in the US and once I have time to reflect on the similarities and differences between my two homes. For now, I am going to make the most of my last weeks in Bilbao!