Although I’ve never been the best speaker I’ve had a fascination with Spanish culture since the 2nd grade. My elementary school had an Spanish class one a week for all grades. Although I obviously couldn’t learn much Spanish as a student while only meeting once a week ,I did learn many things about the culture in Spain as my teacher was Spanish. Since that class I’ve always wanted to explore the world and particularly Spain. Some major factors that affected wether or not to study abroad were; how it would effect my work towards my degree and of course cost. As an engineer I was never optimistic about studying abroad because I figured it was mostly for Business and Arts and Science majors. Luckily one day a representative for studying abroad came to my engr 103 class and talked to us about the programs available to engineering students. By the end of that day I believe I had already applied for my program. As for cost when I researched the program I discovered it was largely affordable maybe even more so than UA, I also discovered that you can apply scholarships you already have, and apply for new ones.

Last summer I was fortunate enough to take a senior trip to South Korea with some of my high school friends. Although it was my first time out of this country, I was never really alone as my second mother (as I call her) came with us to show us around. I know this trip will be very different as it is over twice as long and at least at first I will be truly alone. I haven’t yet met anyone else partaking in my program but look forward to meeting them when in Madrid. Many weeks ago I decided that It would be cool to fly in before the group and tour Madrid by myself.  For the first time in my life I will be truly alone. Emotionally I’m mostly excited about traveling to Spain but also a little anxious as I know it will be very different there and I won’t have my phone or Internet (at least mobile internet) for the first time in many years and I know I’ve grown to rely on them. The last preparation I had was packing. I largely waited till the last minute to do this but found it challenging to keep my suitcase under 50 lbs. I knew I wanted to pack a duffle bag suitcase into the suitcase I was bringing because I did that on my trip to Korea and it worked great for souvenirs coming home. Packing a suitcase inside a suitcase is a little challenging and costly on the weight, but I managed. Another struggle was shoes I desperately wanted to bring running shoes but was unable to bring them due to weight.  I also ended up having to put my Chacos in my carry on. In the end I had to drop some cloths I planned on bringing and everything worked out.
I still don’t believe that it has really hit me that in less than 24 hours I’ll be on the other side of the world by myself. During my 5 weeks in Spain I look forward to trying new things, learning about a new culture, and making new friends. I’m hoping that I will be able to take weekend excursions to other parts of Europe as I have no idea when the next time I will be fortunate enough to be there again. 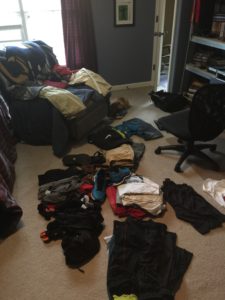