My first week in Belize 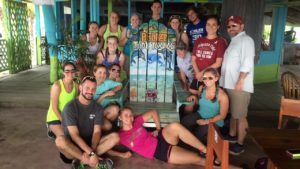 Belize is a beautiful country just south of Mexico. I have yet to meet a stranger here. The locals learn English in school, so English speakers will not have a problem communicating or getting around. Languages also spoken here include Spanish, Kriol (a unique mixture of mostly Spanish and English), and many Mayan languages used in the smaller villages.

This first week in Belize (out of two) is being spent working with TIDE, the Toledo Institute for Development and Environment. TIDE is an NGO that seeks to protect the environment and communities of the Maya Mountain Marine Corridor, a section of southern Belize in the Toledo District (the southernmost district in Belize). TIDE now privately owns nearly 23,000 acres of land stretching from the mountains through to the reefs alongside the coast. Their goal is to promote sustainable development and environmental conservation of the Toledo District to take pressure off of the local fishing and hunting industry.

Most importantly, TIDE is made up of a wonderful group of both locals and foreigners who work together to accomplish their goals in a fun and exciting way, and by doing so, break down cultural barriers that might exist between all people, from those whose family have lived here for generations, to those just visiting for a week or two.

One such way that TIDE impacts the local community is through outreach activities, including a focus on youth education. They put on an annual Freshwater Cup, where students from local schools form teams that must organize a volunteer project based on protecting the environment; these groups then are allowed to compete in a soccer tournament. Winners of both the tournament and the volunteer efforts are selected and given prizes.

While my study abroad group has only been working with TIDE a few days, we have cleared parts of the trails on the protected lands, planted trees in the community of San Pedro Colombia, and snorkeled in Snake Caye. This amazing experience has been more than I could have asked for.