My first impression when arriving in Santa Domingo/San Juan was shock at how different it is than what I am used to. I was shocked and felt so thankful for what I have. The first situation I encountered was the communication barrier when everyone around me spoke spanish and I only speak English. It became a barrier to almost everything I needed to do because few people were bilingual. The culture was so interesting. The food was different and involved a lot of rice. It took some getting used to not being able to drink the water. The first picture I took was of our camp in Santa Domingo.

My host location was actually in San Juan. On the second day in the Dominican Republic I traveled three hours from Santa Domingo to San Juan, where we stayed in Hotel El Libano. My favorite thing about the host location was the people I got to know while I was there. There was a large group of us, including doctors, the medical team, team leaders and translators. I also enjoyed the food. Although I was very tired of rice, I enjoyed getting to try the national food and was glad I never went hungry. I will miss the people most. Over the course of the week I made many new friends and got to know many people. I hope to see them again someday.

Taking classes abroad was completely different. Although I was only there a week, I learned so much. The patients you see are drastically different and have different problems. I had my first patient with parasites. My classmates were students from my class, fourth semester, third semester and second semester nursing students. It was a joy to meet new people from my college. It was an adjustment because the patient care is so different. There is a limited amount that you can do for the patients there and they need so much. But we did everything we could with the time and supplies that we had. It was hard to have to tell people that there was nothing we could do for them.

I was lucky enough to get to see both Santa Domingo and San Juan. Once in San Juan, we traveled to a different site to set up a medical camp everyday. We went to four different schools/churches. In Santa Domingo, I was able to experience some historical sites. At the historical site, there were many cool buildings to see, shops and places to eat. We walked around and took in all the sites. I got to meet many locals in San Juan. I traveled with my group and the leaders chose the locations where we were most needed and where they knew local churches.

I met so many new friends on the trip and many were locals. They live in the city of San Juan and most were students. Many studied languages and learned how to speak english through a one year program. I was impressed that their english was so good. I met so many people, it’s hard to describe just one. But everyone I met was incredible and I feel blessed to have their friendship.

The language of Dominican Republic is Spanish. I faced many language barriers because I do not speak Spanish. It made it hard to buy things, understand what people were saying and to communicate over all. I did learn several phrases while there to help me to communicate, including the word for bathroom. The accent is very different, but many words are similar in english and spanish. This made reading easier, but they speak so fast I could not understand.

The first sense that comes to mind is taste. I tasted a lot of rice. I heard a lot of Spanish. I saw a lot of poverty. I never smelled anything fresh and I felt very lucky to have what I have and to be healthy.

I took home some souvenirs, including coffee to try at home and the locals gave all of us a coffee cup with our name to take home. I tried to leave a lot of stuff there that I didn’t need. I left my towels and blanket and supplies. Our leaders also left all of the leftover medical supplies that we didn’t use. 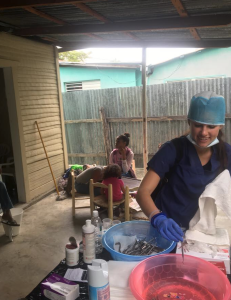