In America, I am a huge football fan, no surprise there. But, soccer isn’t exactly number two, three, or four on my important sports totem pole. However, being at this game felt very reminiscent of attending an Iron Bowl or SEC Championship or any other high stakes game back in the States, and I quickly caught on to the chants and felt right at home. Sports are sports, and it doesn’t matter what language you speak, everyone can join in on the fun and cheer the team to victory. The fans were extremely passionate, and the players left it all on the field. It was great to see, that in this way, our countries aren’t so different after all. I almost passed on the opportunity to go to the game because I wasn’t sure I would enjoy it, and gosh was I wrong. I finally decided to go because getting out of my comfort zone was a huge part of the reason I was more than 5,000 miles away from home anyway, and it didn’t make sense to start limiting myself now? Just last week, I told my best friend that being abroad is all about embracing the moment and living life through a different lens. Had I failed to take my own advice, I would have missed out on my favorite memory thus far. 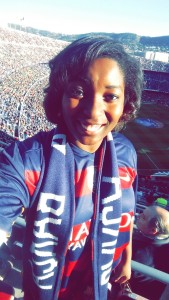