Is it really my 3rd month in France? Wow how time flies. I have one month left in Tours and I can’t believe my time here is coming to an end. It’s been an amazing adventure traveling and settling into this cozy French city, and I have to admit I will miss all of it very much. I’ll save the mushy thank you blog for another day- I just want to share a few of my adventures since my semester abroad started.

I started off the semester with some trips to a few famous Chateau in the region: Chambord and Chenonceau

Then I moseyed off to Paris for a day…

After that I spent a few weeks in Tours enjoying the region and happenings in town!

And then! I met up with my dear dear friend Madison Drury from UA studying abroad in Rome in the magical city of Barcelona for a weekend.

Tapas by the sea

After Barcelona, I made off to Paris once again- because who can’t get enough of Paris?

After Paris, I had a week off from classes so planned to go to Brussels and Rome.

Pizza for every meal

We ate all the waffles.

Day trip from Brussels to Bruges

Church in Rome- thanks Mads for the tour 🙂

The next weekend I met up with another dear friend, Rachel Solino, at her new home in paradise (Menorca, Spain).

At the fisherman’s market!

Sunset by the mediterranean

We had the day off for Armistice Day, so I joined my awesome roommate Marie at her grandmother’s house in Neuilly (about an hour away from Tours).

The city of Descartes- where René Descartes was born.

Marie and I after riding bikes to the Château!

The next weekend, the attacks in Paris happened. I won’t lie- it was scary. And I stayed up until I couldn’t force my opens open anymore listening to the news. I decided to include some pictures from Tours during the aftermath of the attacks. 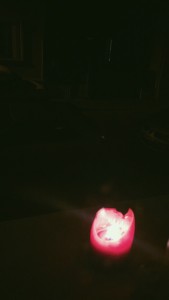 People decided to put candles in the window for those affected by the attacks. 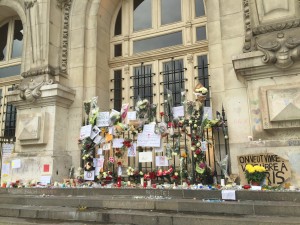 Hôtel de Ville after the attacks.

Looking back, its been a whirlwind of adventures! I’ve met so many wonderful people along the way and I’m excited to make the most of my last month here!