We’ve Got it Good

Upon arriving in Cambodia it was apparent what poverty the country lives in. On the way to the hotel from the airport I could see people on the side of the road doing business out of there homes; keep in mind we did not arrive in Cambodia until about 1 o’clock in the morning.

The next day we met up with our translators who were native to Cambodia. The people are overwhelmingly happy and thankful for what they have even though they have next to nothing. We held a medical clinic on the first that allowed people from the villages to come and get a focused examination on any health issues they were having. We were then able to offer them medication on the spot. Each of us brought 10 pounds of medication over to Cambodia from the United States.

At the end of the day we had an end-of-the-day wrap up, and one the translators had a touching story. She was an elementary music teacher. She told the story of a young girl who one day stopped showing up to school. She was an 11 year-old girl who the translator had taken a liking to so she took a particular interest in her absence from school. After talking to people in the village the translator figured out that the little girl’s parents had sold her into sex slavery.

It was then that I realized how blessed I am to live in a country where parents do not sell their children into sex trades for money. The United States has a government, rules, and officers to protect its people in a far greater way than Cambodia protects its people.

The entirety of my trip was extremely eye opening and filled with blessings. 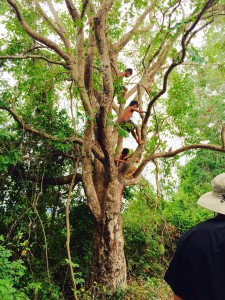