Valparaiso: A Haven for the Eclectic Mind

When my initial investigations began for the study abroad trip to Chile, I realized quite quickly that between Santiago, Easter Island, and Valparaiso, all the various facets of my personality would be catered to quite nicely. From my over-eager examination the three rose as if on pillars, a triumvirate of traveling ideals:  Santiago would cater to the socialite, intermixing with the emergent cosmopolitan nature of the capital city, Easter Island to the adventurer, willing to attempt most any outdoor activity on the enigmatic island, while Valparaiso would be for the quiet artistic spirit, eager to be lost among the vibrant buildings. As the program progressed, it felt as though I transitioned through those varying expressions quite distinctly. If I am being more sincere, however, it is far more likely that my spirit wearied of Santiago too quickly and was left hoping Valpo might allow for rejuvenation. (This is not to disregard Easter Island, because a more perfect excursion could not have been experienced; that is merely a story for a different day.) This contributes in part to the profound appreciation I felt upon entering Valparaiso. From a distance the tumultuous and dynamic city professed a dizzying array of neighborhoods and thoroughfares, but upon closer inspection the disorder obtained a level of organization and chaotic calm that enchanted the eye and steadied the mind. The joy it produced in my heart never waned; we spent our days climbing  through a variety of staircases and seemingly secret passages, desperate for alfajores (an addicting and deliriously wonderful combination of thin cookies, chocolate, and dulce de leche) or in search of cultural hideaways. It seemed, as well, that we spent a vast majority of our time abandoned to distraction, admiring the artistry of the murals and their context within the city. Whatever had begun to recede in my spirit reemerged, reinvigorated by the melodies and unexpected cultural infusions. Unfortunately the time available to us there was limited, and the moment for the bus ride back to Santiago arrived far too quickly. I will never forget that city and the solace it provided, and will make every effort to return to it some day. 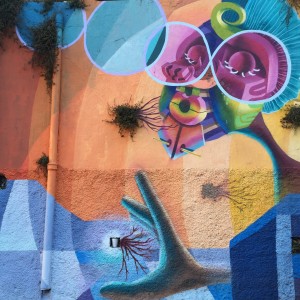