The Palio di Siena is a horse race that is held twice each year, on July 2 and August 16, in Siena, Italy. Anyone traveling abroad during those two dates in Europe should make an effort go see this thrilling and culturally rich tradition. Here’s my attempt at the need to know facts. There are 17 districts, called contrade (plural, the singular is contrada), that divide the city of Siena. Each year, they draw lots to determine the 10 out of the 17 that will be in the race on July 2. The other 7 districts will be in the race in August. Each district has one rival (except Torre, they have 2), and these rivalries are very real (after the race, it is highly recommended one does not wear the color’s of a rival in a district). The actual race is ridden bareback and has almost no rules. The one rule during the race is a jockey cannot grab another jockey’s reins. Pushing and shoving is allowed. The jockeys’ whips may be used disrupt each other. Also bribing and secret deals are frequently made. On the day of the race, lots are drawn again to decide the order of the 10 jockeys. 9 of the jockeys line up on the start / finish line. The 10th and last man loiters 10ish yards behind them; and when he decides to cross a certain line, he activates a switch triggering the release of the 9 jockeys in front of him. The 10th jockey is trying to play mind games and/or wait for a split second where his rival is in a bad starting position. This process can take an hour. But when he makes his move, the jockeys must make 3 laps around the Piazza del Campo, the main city square which is covered with several inches of dirt. Only the horse must cross the finish line to win, and frequently riders are ejected from their horse. To the people of Siena, it is worse to come in second place than last. Also having a rival lose is a victory in and of itself for the other contrada.

For a few days leading up to the race, there are several parades and banquets held in all corners of the city. Each district has their own story lines of creation and rivalry, so I would suggest arriving a day or two ahead of the race and soaking in all the festivities and culture. 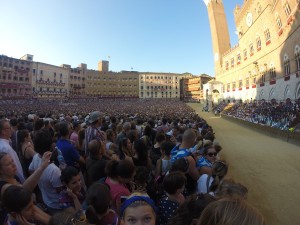