Paris is a Woman

“Cities have sexes. London is a man, Paris is a woman, and New York a well-adjusted transsexual.” -Angela Carter

When I first arrived in Paris my first impression was that it looked absolutely nothing like Germany. Stuttgart and Germany (where I spent a week with family before starting my program) are very clearly designed by engineers. Everything is mechanical and exact. Paris is very clearly designed by a people who want nothing more than to have the most beautiful city in the world. While their population density is twice that of New York, most of the buildings aren’t more than seven stories high. (In fact, there was a law limiting building height in most areas of Paris until 2010.) Every window has a decorative ir 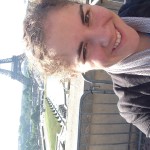 on fence outside it, but on each building they’re just a little different. Paris lives up to every word of it’s reputation for beauty and class. Every street corner has a little cafe selling sandwiches on baguettes and chocolate croissants and every garden is in full bloom in summer.

Tours (where the last four weeks of the UA in France program is spent) is a little different. While there are still tiny cafes and blooming gardens, it’s impossible to miss that here, finally, is a city where people really live. And for the next four weeks, I knew I would be too. When I arrived here, my head was filled with questions about the realities of my stay here. Would I be friends with my host mom? Would there be other students in the house? Had I done well enough on the placement test to get into a decent level at the Institute? The answers, in order, ended up being yes, no, and sort of. I was so excited to be here and happy to be settling down a little after two weeks living out of a . suitcase.

After getting my suitcase unpacked, I went on a walk around the town with some friends from UA I’d gotten to know in Paris. Before I found the group (using the very helpfully labelled map my host mom gave me) I walked through the park (Jardin des Prebendes) near my host home, where a jazz band was playing for locals gathered on the park benches and lounging in the grass (technically not allowed but I’ve never seen anyone get in trouble for it). I sat and listened for a little before moving on. That  park is now my favorite place in the whole town. 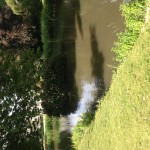 Hardly a day goes by when I don’t spend a few minutes enjoying the tranquility of it.

Classes started two days after I arrived in Tours. The classes are taught entirely in French, as the students at the Institute come from all over the world. Two of my closest friends in class were from Taiwan! Probably the biggest difference in the classes is that grades are not inflated here. It’s not uncommon, or even bad, to get a 15 out of 20. 15 or 16 is considered as good as an A in America, even though with straight percentage conversion those grades don’t look very pretty. However, once I adjusted to this new system, I did pretty well in my classes and learned a lot.

This year becaue the dollar is doing very well, our group had all the excursions provided by the institute paid for. This means that including my time in Germany (4 castles) I have seen 14 castles in the past month and a half. This is what the Loire Valley, where I’m studying, is famous for. Many French kings, such as Francois the First, enjoyed hunting in the region. The result is an area filled with architectural masterpieces. At Chambourd I saw a double helix staircase designed by Leonardo da Vinci and at Chenonceau 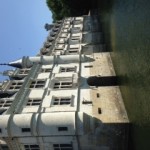 I saw the castle that was used as a bridge between the occupied and free parts of France by the French resistance during WWII.

The best experience I’ve had getting to know a local her in Tours has been with my host mom. She is a graphic designer who just celebrated her fiftieth birthday. She lives alone but is constantly visited by her family, friends, and “amoureux” Jerome. I am staying with her in her very prettily decorated (graphic design training pays off in other ways) home in a residential area near the town center in Tours. We talk about everything from politics (she wishes the socialist president here would be a little more socialist) to musical theatre (she thinks English and American musicals are better than French ones). She is an extremely strong woman and even during the difficult moments I’ve seen her deal with, she’s always kept moving forward.

I’ve been pleasantly surprised how much I can get by in French here. My host mom speaks English as well as French, but other than one small issue with keys, we’ve conversed nearly exclusively in French. At one point I was trying to explain than many European car brands are considered luxury in America and mostly rememberd that the French word for luxury is “luxe.” I used that but second guessed myself and tried saying “luxure” afterwards. My host mom stopped me, as both her and her friend who was visiting laughed, explaing that while “luxe” is the correct French word, “luxure” is actually the French word for lust or sex.

Being in such a totally new place is an experience of the senses. Each morning walking to school I see the pink of the flowers in the park. I hear people walking their dogs late at night outside my window. I smell the delicious food in each of the many cafes I pass. I taste the simple sweetness of crepes from a street truck. I feel the quick kiss on each cheek when I meet someone new. (True stereotype. People look at you weird if you try to shake hands.)

I’ll be going home soon, and it’s so weird to think about. Mostly it’s very nice. I get to sleep in my own bed and eat American breakfast. (The French skimp on breakfast. Toast and yogurt at best.) However, the trip back will be a long one (with layovers and getting the the airport early so other people in my group can catch their flights, almost twenty four hours) and I’m not looking forward to the jet lag. My suitcase is a little more full than when I came. I bought two new dresses here, including one from a street market a lot like American garage sales. I also have presents for my whole family, including a copy of the French classic Le Petit Prince in Spanish for my brother who doesn’t study French.

I will never be the same after this trip. In life, I think it’s very important to see the difference between safety and comfort. Think carefully about what your safety boundaries are. Don’t go past them. Whatever inside those that makes you uncomfortable is worth trying to do. Learning to face discomfort and be brave makes you stronger. So go on an adventure. Talk about art in a cafe in the middle of the night (check). Sit with friends by a river and watch fireworks (check). If you’re feeling crazy, learn a little about yourself (check and double check).

It’s been great, France. I forgot to bring any ruby slippers, but hopefully sandles and a commercial airline will work just as well. There’s no place like home.