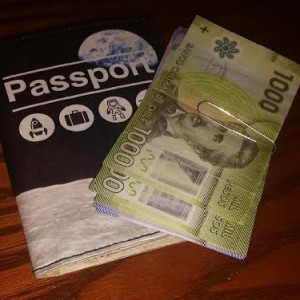 I’m wandering through the student union in midwinter, attempting to kill time before class. Fortunately for my wanderlust and unfortunately for my finances, today is the study abroad fair. Each booth whispers to me, reaching with phantom hands to pull me closer. China? New Zealand? Ireland? No, no, no. I peruse each aisle of the fair with the understanding that not a single program is possible for me, and that this is just a way to pass the time before I duck my head and scamper along to my next class. Besides, not a one of these locations offers a class I need. Not a one until

Chile. Easter Island. And now I’m examining a brochure for a country I had never so much as thought about visiting. All because the tiny pamphlet said “Creative Writing” on the front. Because, let’s face it, three repetitions of the same class for your minor never sounds interesting unless one is offered overseas.

So I went from grabbing the paper as a joke to enrolled in the program in about two weeks. I knew from age five I was going to study abroad in college, but I didn’t think it would be such a quick process. I’d like to say that I seriously considered every program option. I’d like to say the country of Chile is my passion and I’ve taken five years of Spanish and I wrote my high school senior thesis on Pablo Neruda. But the truth is much more selfish and much more simple. The world was calling to me, and I answered. I was dying to travel this summer, and Chile was the most practical and affordable option. Not to mention the class credit.

And yet, I’m just as excited as I would have been if I were heading to a country where I spoke the language or had studied the history. For me, study abroad is about unexpected experiences. It’s a chance to travel in a way that is both educational and adventurous. Sure, it’s not one hundred percent possible to just wake up and decide to go to Chile. There was a lot of research, schoolwork, and preparation that needed to be done after I made the initial decision. It’s been tough, but I don’t regret it for a second.

Why Chile? Because it was there and because I could. It doesn’t need to be any more profound. Sometimes that gut impulse can lead to the best decisions of your life. I firmly believe my month in Chile will prove to be one of those cases.

Check back later and see if I’m right!