I have experienced so much traveling through Greece for the past couple of weeks. It is hard to believe that it it went by so quickly but in some ways it seems I have been here for a long time. It was surreal learning being at sites like Thermopale and the Parthenon that I have been reading about my whole life.  I have a brand new appreciation for the magnitude in which Greeks have influenced western culture. It truly is a an ancient place that has so many layers of history. One of my favorite sites was the excavation of ancient Thera, an ancient city preserved by a volcanic eruption 3600 years ago. They had threw story housing, workshops, and indoor plumbing in a time when most people lived in huts. Some speculate thst the island of Santorini was the site of the ancient city of Atlantis before it was destroyed by the massive volcano. Seing these sites with my own eyes brought history to life for me. It also made me realize how much work still needs to be done and how many secrets are laying waiting to be discovered.  In ancient Thera they had only excavated a small amount of the city and in Athens they are working to rebuild the Parthenon. By far my favorite moment was standing in front of the tomb of King Philip the 2nd father of Alexander the Great. It is underneath a huge hill that has been excavated and was hidden for thousands of years. You could still see the paintings and decorations on the wall, and all of his riches on display which were equal to that of the Pharoahs. It was one of those surreal moments where you can peer back into history and see some of the great people who stood before. 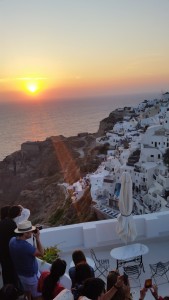