The Palio of Sienna

The Palio is a festival in Sienna Italy that has been going on since medieval times. There are 17 district in the city called contradas.  Each contrada has its own flag,  traditions, and public buildings. The people of a contrada are considered your family and stay with each other in good and bad times. The most important symbol of one’s contrada is the scarf that is given at baptism and kept for life.

The palio ia a horse race in which each contrada sponsors a horse and jockey that race around a track in the city center. It happens twice a year and is a huge deal for the people of Sienna.  The build up and excitement around the event are electrifying.  Upon arrival I started learning about each contrada and their allies and rivals.  I chose to go for Torre which has an elephant with a tower on its back on a red background because Roll Tide. I got the city center with my friends early and staked out an area right on the edge of the track.  In the hours before the race there were parades put on by the different contrada that had knights, musicians and flag bearers all wearing medieval clothes. Finally the race horses came out and drew lots to determine order. The last place horse starts further back but chooses when to charge and start the race. He usually waits until his rival is out of position. In our case this took forty minutes and was nerve-racking because he starts running only to pull away at the last second. Finally the race began and the crowd went wild. It was amazing to see the horse racing feet from where I was standing.  On the 3rd and final lap Torre gained the lead and won the race. All the Torre fans went wild.  It was their first win in ten years. I jumped the fence and ran onto the track and followed the huge procession that went through all the district and ended in their church where there was a blessing. There were people crying, friends finding each other in the crowd, and singing.  It was on the same level if not more excitement as winning the National Championship or Super Bowl. At the end everyone gathered at their community center where there was celebrating all night.

It felt surreal being a part of all the celebration and seeing the passion thst the people of Sienna have for this competition.  I definitely did not know what I was getting into when it started but I would not trade that experience for anything. 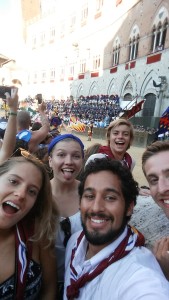