How not to Die in the Running of the Bulls 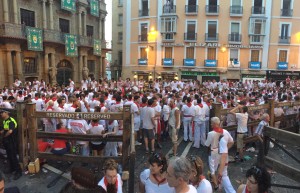 The festival of San Fermin in Pamplona, Spain, is better known as the place where you run with bulls in a packed street. As someone who has done the run (and subsequently received minor injuries), my first recommendation to you would be don’t do it. The most dangerous part is the sheer amount of people in a confined space. There is always the possibility, no matter how much of an athlete you might be, that you will be forced into a life threatening situation because of other runners.

But still, despite that warning, you might sill want to do it. So first let me explain how the running works. All runners assemble in front of the  (their city hall, pictured above) earlier in the morning. Around 7:15 am, police clear out the street and push any stragglers back into the starting area. At 7:45 am, the police will let runners get a head start, allowing them to go about halfway. At about 7:55 am, runners will be allowed to wait right outside of the bull ring. At 8 am, the bulls are released. This will be marked by a rocket for all to hear. 6 male bulls will be released in a tight herd, followed by about 4 steers (oxen) who are much slower. When all 10 bulls have made it out of the starting area, a second rocket will be sounded. Once all 10 bulls have made it into the bull ring, a third and final rocket will be sounded. The running itself does not last very long.

There’s no one sure fire way to do a successful running. My best suggestion to a potential runner would be to get out of the starting area and past Dead Man’s Corner (which is right next to the Ayuntamiento) so that you will have space to move around. Be on the look out for a doorway or nook, because when the bulls are released, that’s where you want to be. Be pressed against the wall and let the 6 male bulls pass you. Then, in the lull between the 6 male bulls and the 4 slower oxen, run to the bull ring and immediately get out of the ring. As long as the 6 bulls stay in the herd, they will run in a tight pack down the middle of the street.