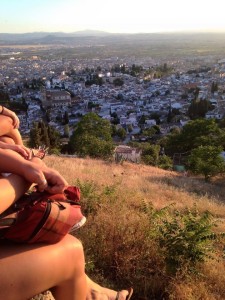 Most people dream of traveling the world, and once your tuition is paid for a study abroad program, that’s exactly what most people do, including me. One important thing I learned is that when you travel before studying abroad, the things you expect from your travels and what you experience will most likely be different. As they say, no two experiences are alike.

I, like some of you may do, have traveled in Europe, and during that time, studied in Spain before I started my UA-Faculty led summer trip in Madrid. My journey began with a semester abroad in Granada, Spain. I started in January, fell in love with the city, and really began to learn about the world and myself. Throughout my semester, I traveled to cities like Paris, Cracow, London, Dublin, Chefchaouen, Lagos, and Malaga. With every visit, I learned more about other countries, their customs, and my preferences as a person. I managed things like learning to use the Metro in Paris to bargaining in Morocco. My confidence grew from my experiences, like meeting strangers in hostels who later became friends and learning to protect my money, from thieves as well as myself. My trips were amazing but after every visit when I came back to the city, it felt more and more like my home.

In Granada, I became comfortable with the people, language, and my surroundings. I became confident in myself and like every American goal when traveling, I felt like a native. I could go to a store and buy something without someone speaking English to me because they either 1.) Knew I was American or 2.) Thought I couldn’t understand Spanish. The Arabic and Spanish mixed culture, flamenco, and beautiful scenery became a part of my everyday life. Within 5 months, I met amazing people, friends, and became a part of a family. With all of these amazing experiences, I knew they would become memories as my time there was quickly fading. Within a few days, I would be traveling to Madrid, Spain to continue the final part of my studies.

I was worried because I was changing cities and not coming straight from America. After living in Granada for 5 months, I was nervous for the change in cultures between the south and north. I was worried my southern Andalusian accent would make people think I couldn’t speak proper spanish or that no one would understand me. What worried me more was that I would lose my accent. I was worried that I would be in the “big city” and things would be too overwhelming and hoping that there would be toilet paper in public places (unlike the southern region). I hoped that the people I met in Madrid would be as cool as my friends in Granada and that I would have wifi to talk to my family. And most of all, hoped I could find a speaking partner to help with Arabic like I had in Granada.

But as I said before, no two experiences are the same. Although these concerns and hopes where there, when I arrived to Madrid, it wasn’t what I expected. The big city where I thought would be so overwhelming turned out to be a monastery in a cute little town. Although I miss my Spanish family immensely, the amazing friends I met on my trip have helped me get through it. The cultural differences in Madrid and Granada are far fewer than I anticipated, making me feel more comfortable with my surrounding. The cool part was that my southern accent was noticeable when I spoke but when speaking to other spaniards, they recognized it fairly quickly and were impressed.

In the end,I am very happy with my choices of starting my studies in Granada and finishing in Madrid. After all of my traveling prior to this, the UA Faculty led program is a good way to get readjusted to American life because after being away for so long, I started to do things that aren’t normal back home (like eating pizza with a fork and knife and saying “vale”, “bueno”, or “entonces” in every sentence). But I think the greatest benefit of this trip will be that I am meeting people and making new experiences with them. And best of all, we will be able to go back to school together to continue our journey at UA when this is all over. 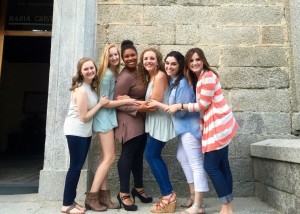