Can the Queen Hear the Planes?

While in London, we went to Windsor Palace. Truth being told, I recognized the name, but I had no clue what to expect. It turns out, that Windsor Palace is the home of the monarchy in England. About an hour from Buckingham Palace, Windsor sits on top of a hill overlooking the town of Windsor and the English countryside.

While we were there, we did an audio tour that took us through the gardens and state apartments. The rooms inside were magnificently  decorated and full of history from past kings and their knights. Little did I know, this was actually still used as one of the Queen’s homes. While we were there, a helicopter came into view and landed on the other side of the castle. As we continued our tour, we walked by a gate that showed the Queen’s living quarters guarded by a Royal Guard soldier (aka a bobby). The Queen often uses Windsor as her weekend estate and luckily for us, it was the weekend. We later found out from a local policeman that the helicopter was in fact the Queen’s and that she was at the palace.

As we were about to leave, we ended up watching the changing of the guards. With a parade, music, and a lot of yelling commands, we saw the Royal Guard change shifts. That was interesting, but in the middle of the ceremony, an airplane flew very close overhead. The London Heathrow airport is not far from Windsor, and the plane was descending for landing. It shocked me as to how close the plane was to the castle. That would be a killer view from the plane, but it also seemed like a security hazard. It was so close to the castle that all you could hear was the plane. Then I thought about how the Queen must feel about having the airport so close. I was wondering if she could hear the plane so clearly from her state apartment or if it had very good insulation. 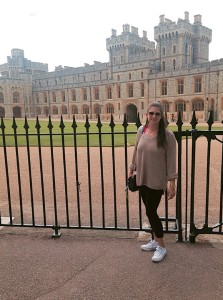 The gate in that looks into the Queen’s apartment at Windsor Palace.