Spring vacation was an amazing experience.  While most of my friends opted to travel outside Italy, I decided to stay and explore outside Milan.  A friend and I chose to travel to Sicily for five days, going to Palermo, Messina, and Catania.  We spent several days in each city, site-seeing each of the places offered in our self-tour of the island province.  My personal favorite was Messina.  It was beautiful, warm, and the people were very friendly.  The food was delicious, the buildings amazingly rebuilt and preserved (there was an earthquake that struck the island in 1908).  Messina is also famous for their churches.  One of them was well known in the area because it played a long song and had moving statues, figures, and parts that followed the song.  In case anyone was wondering, the whole thing last about 12 minutes.  Nice to see, but a little boring after standing for a while.  Anyway, Sicily itself was large, with very few cities and only a myriad of small towns.  The only way to travel for us was by train, which was never shorter than 4 hours between the cities. I left Messina to go to Naples.

Naples was much different than I thought it would be.  Not just a hub for organized crime, it is also one of Italy’s historic centers, with easy travel to Mount Vesuvius, Pompeii, and Herculaneum, but it also has its own castles, temples/churches, and other sites to explore.  I went straight to Pompeii to see the old city and to get close to a dormant volcano.  I was excited, who hasn’t ever dreamed of going to Pompeii and to walk around a city untouched for almost 2000 years?  It was fantastic!  I began at the temple to Jupiter, wandered my way to two theaters that were once used to show the latest comedies and tragedies before that fateful August afternoon.  I saw old bakeries, gathering places, markets, fields, everything there was to see before I left.  Even for a full day, I could’t see the whole of Pompeii.  Unfortunately, my one day of exploring was only in Pompeii and not the rest of the Napoli area.

I left for Milan the next day by train, taking over 10 hours to get home.  It was a beautiful train with everyone having their own wall socket, wifi, and chair for the ride.  It just didn’t have any food, nor could I buy anything to quench my thirst.  So lesson learned: traveling by train, no matter how fancy, can’t compare to a plane when the trip is 10 hours long. 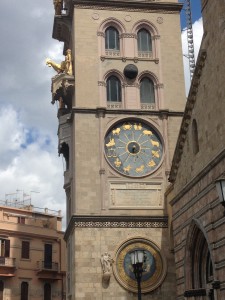