One morning in December I woke up to the day that I wish hadn’t arrived just yet. All sorts of emotions flooded in, and I wasn’t as prepared as I thought. Leaving Australia was going to be harder than I thought. I had grown a connection with this place and it had become a home to me. It was a place that burned a permanent mark on my heart, and I knew I wasn’t going to feel satisfied again until I returned.

Classes ended a few weeks before I flew home, so I got to spend a lot of time sunbathing on beaches and adventuring around the city. I also got to spend time with friends that I had met while living there. They showed me surf spots that tourists would never see. It made the experience feel real and not so much like a vacation. I felt like a resident because I knew the city pretty well by the end of the year.

The last week before leaving was the hardest. I had to face the reality that this life I had created living here would instantly be put behind me as soon as I got on the airplane. I knew my life was going to take a drastic change and I wasn’t sure if I was prepared. The days crept up faster than ever and after days of endless packing, I was able to condense a year of living and site-seeing into 2 suitcases and a carry-on.

That day in December was here and I was feeling all sorts of emotions. I was sad, yet I was excited to see my family. I was anxious, but I didn’t want to forget everything I had experienced. I was starting to miss everyone back at home, but I was going to miss my friends I had made here so much. I wanted to live in both places at once, but that just wasn’t possible. It’s hard to explain what it is like to leave a place filled with people that you love. I had formed a permanent attachment to the people and the place.

I arrived at the airport and spent some last moments together with loved ones who were so gracious enough to drive me there and spend with me my last moments in Australia together. We had our last lunch and shared our last laughs and tears. Before I knew it, I was already in line in customs. I was saying goodbye to a place that I had fallen in love with. But I had family waiting for me on the other side and I was very excited to get on the plane back to the USA.

The next 21 hours weren’t very easy. It was an emotional process boarding the plane. Before I knew it, I was in the air and out of Australia, and that was it. I was going home. Seeing my parents in person at the security gate was an overwhelming, but exciting moment. It was a year since I had seen them in person, and not just over FaceTime!

I was back where it all started before my Australian adventure and it felt as if it was all a dream. Did I really just get off the plane from a 21-hour journey from Australia? I was in shock by how much my life had changed all in a year’s time.

As I slowly progressed to making it home, I noticed how much of my perception had changed. Driving on the right side of the road didn’t seem normal to me, seeing unhealthy American food restaurants again sickened me, the gas prices were cheaper, and I was going back to living in a fast-paced lifestyle again. I wasn’t used to my surroundings, and it was definitely going to take some time to get used to again.

Traveling back home wasn’t even the hardest part. The hardest part was how much I had changed, and my home hadn’t. My parents were still doing the same routines they had before I left for Australia. My friends from home and I had nothing in common anymore. People would become jealous when I’d talk about my experiences abroad. I’d catch myself saying “Well in Australia,…” all the time and I’d realized that people don’t care as much as I do about Australia because they just couldn’t relate.

The excitement of coming back home has worn off a little. I am constantly thinking about when I will be going back to Australia because it had become my second home. Studying abroad really opened up my mind to opportunities that would have passed me by, if I didn’t take the leap to go abroad. There is so much that this world has to offer and so little amount of people who actually take the time to travel abroad.

The best decision I ever made was to decide to study abroad. I picked a place I had always wanted to go, and just did it. It turned out to be the best year of my life. 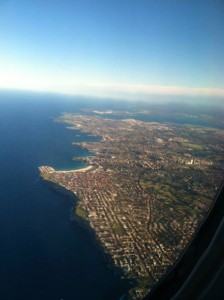 Last site of Australia.. Until we meet again.