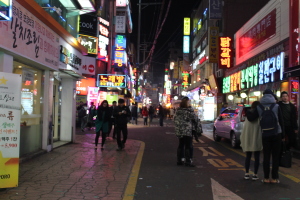 I’ll start first by talking about the people, and by people I mean locals. If you don’t look Korean the first thing I will tell you is get ready to be stared at. It’s not that they are being rude, it’s just that you simply look different and since the foreigner population is still very small in Korea, everyone is just curious. The locals are really nice and if you’re worried about the language barrier, have no fear, most of the younger generation Koreans know a little bit of english. The older generation (in korean,할머니 and 할아버지), on the other hand, hardly speak english so I advise studying up on some basic Korean skills at least before you arrive.

FOOD. Everyone’s favorite topic, am I right? Food in Korea is unbelievably cheap and the quality is actually really good for the price. If you wanted you could definitely eat for under $8 every day, that is if you eat basic Korean food every day. Traditional American food, Italian food, Indian food will all be on the expensive side and not what you would call “authentic” but pretty close. There are so many different restaurants everywhere, it’s almost hard to keep up. You could probably eat something different every day without repeating the same dish. The diversity of food is honestly quite unbelievable.  Also, street food is extremely popular in Korea. Street food ranges from, rice cakes, blood sausage, fried vegetables, dumplings, waffles, egg bread, crepes, chicken, literally the list could go on forever. Not only is street food cheap but 9/10 times it’s pretty delicious (just not the healthiest option).

Traveling, traveling, traveling. A study abroad student’s favorite activity. Traveling within in Korea was not too difficult. I was able to travel to Busan (부산), the second largest city in South Korea after Seoul(서울). I decided to go by bus which was the cheaper option, but more time consuming. It took about 5 hours to get from Seoul to Busan, which was bearable at a price of less than $20 one-way.  (You can also take the train to Busan and it would only take you about 3 hours at a cost of around $50 one-way). My friends and I chose to stay in a “home-share” type boarding home, which only cost us around $12 a night. Now I know you’re probably thinking there’s no way that place was sanitary or even livable at a cost of $12 a night, but in actuality it was quite clean and very comfortable. I would truly recommend it to anyone who wants to save as much money as possible. Anyways, you’ll be out traveling all day, no need for a 5-star hotel. Purchasing tickets for the bus and reserving a boarding home was all pretty simple, so those shouldn’t be of any concern when traveling about Korea. One thing I would recommend is know what you want to see at the destination you’re traveling to and how to get there from where you are staying (i.e. hotel, motel, home-share). It will be a lot easier than trying to figure it out when you are there! You don’t want waste time getting lost!

Last, but not least, the culture of Korea. Korea’s culture is based on a very hierarchical system meaning you must treat your elders/anyone with higher power than you, with respect. Bowing, using two hands to give or receive an item, highly formal speech, are all examples of respect. You also use these signs of respect towards people you’ve just been introduced to, especially if you are unsure of their age. Another part of the Korean culture is that you must take off your shoes at the door of someone’s home, temples, and also in some restaurants. You will know which restaurants require you to remove your shoes because it’s usually only the restaurants where you dine while sitting on the floor. These are just a few key cultural differences  I think you should be aware of before you come to Korea. Many other cultural differences are present but I find they are better to experience first-hand.

Everything from people to food to traveling and the culture continue to make me fall even more in love with Korea.