Saying goodbye to Cologne was probably the hardest thing I’ve ever had to do…even though I’m coming back.

My last day was the day of the Christmas advent celebration at my school so I got an extra double dose of German goodness before departing. First my fifth graders performed a selection of Christmas carols (in English and German!), then I was invited to my sixth graders Christmas themed talent show, which was too cute for words. 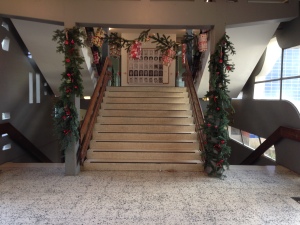 KLS is ready for Christmas!

I teach grades 5-12, though, so the rest of my night was spent running around, dispensing hugs and telling small children not to cry and promising that I would be back! By the time I made it to the tram station, I was so laden with Christmas cookies and cards and arts and crafts that I was barely keeping everything in my hands. 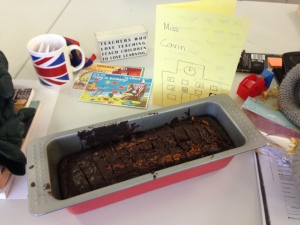 Cake and a card from my 8th graders!

After such a sweet goodbye, I really didn’t want to leave Germany but my visa was about to run out and my flight was already booked. Once I got back to the US, everything felt different. My biggest wish right now is that everyone will just stop speaking English for a second. After living so long in a country where I don’t speak the language (and therefore easily tuning out whatever I want), I became used to actively listening for people speaking English in a crowd so I could run over and introduce myself. I haven’t been able to turn that off since returning to the US, so it feels like my head is constantly spinning in a circle hearing all the conversations and advertisements around me. It is, in short, extremely distracting.

I know that I’m not the same person I was when I left. I feel…removed, a little bit. Like my brain was opened just a little bit more and I’ll never be exactly the same as I was when I left. It’s a change for the better. My horizons have been broadened. Everyone should study abroad once in their life because it changes your perspective on everything. Final words? Definitely an experience worth having. Highly recommended.