We are drawing closer and closer to October, and classes have yet to start at the University of Leicester. I will be studying from October 6th to December 12th, making this my shortest school year ever — I, and my counterparts at British universities, had a five month summer this year! However, since I’ve now been here a week, I’ve had a little bit of time to explore the city of Leicester.

Leicester is the 8th biggest city in the United Kingdom, making it large enough to be exciting but not quite large enough to be nervous about. Travelling throughout the city has proven to be easy — if you have a bus pass! Otherwise, it will cost you upward of 7GBP ($13-$14) for only two rides per day. I know this, of course, because I have yet to get mine… ugh. Regardless, I have been able to do quite a bit of exploring. I’ve wandered through the entire city center already, and thoroughly enjoyed Primark, which is a cheap and bountiful place for any housewares or clothing you might need as a student. Leicester’s open-air market is a wonderful place to spend the day looking at vegetables and fruits, knockoff fancy watches, and myriad ridiculous smartphone cases (my favorite, as a nod to English pub culture, says “Keep Calm and Carry Me Home”). Today I’m going to visit Leicester Castle, ancient home of the dukes and earls of Leicester, and the Jewry Wall, which is the remnants of a roman baths. 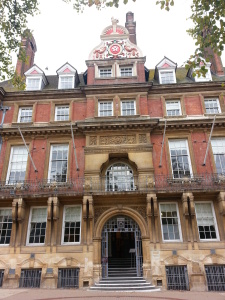 ^This is the city hall near the center of Leicester. The stonework on this building is ridiculous.

If you want to study abroad in the future, England is kind of like Study Abroad Light. You’ll speak the language, the exchange rate is easy (just double the cost in pounds to approximate dollars), and the British are extremely helpful and kind. However, keep in mind that the University of Leicester does academics and registration very differently from in the states. It has taken all of us several days to figure out how anything actually works. But as long as you are self driven and not afraid to ask a ridiculous number of questions, you will be fine.