The Death of a Cat 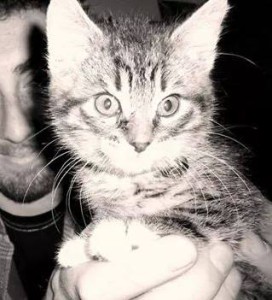 Cuchufli in his kitten form

Yesterday at 3 am, Cuchufli, a cat of one and a half years, died.

Cuchufli was struck by a car, found by my host sister, and rushed to the hospital. He had suffered a fractured hip, among other things, and it was unclear if he would make it through the night.

Sure enough, he stopped breathing sometime soon after my host mom fell asleep, and he was quickly buried in the backyard the following morning after I had gone to school.

It had all happened very quickly. Cuchufli had been consistently bothering me in his own special way since the moment I entered the Alvarado household– pretending my feet were mice, pretending my hands were mice, and pretending all of my belongings were, as you might have guessed, mice. Not only that, but Cuchufli was also a master of climbing on top of you, and everything else for that matter, at inconvenient times, and had a funny habit of trying to climb the wall when he became excited. Possibly the worst thing about Cuchufli was his refusal to allow anyone to show him affection, which only tempted each family member to pin him down and pet him until he eventually squirmed away.

I could spend an entire blog post pondering why we choose to love pets who are ultimately more trouble than they’re worth, or wondering how much pestering it takes for a pet to win over our hearts. The fact is that Cuchufli had our hearts in the palm of his hand all along. As a foreign exchange student Cuchufli was to me a fluffy topic of conversation, always there for me when I found myself in an awkward silence. Cuchufli was a meaningful point of connection for me with my host family.

And even as we mourned his death, we reminded each other of his peculiar mannerisms that made him so unique and lovable. For two hours we shared dinner together, trading stories about the strange little creature, laughing and enjoying good food. Even in death, Cuchufli helped us to connect to one another.

And in that, Cuchufli reminded me of an important truth: it’s the small continuities, like the sadness found in the death of a pet, in life that connect us. It is these small continuities that remind us that our human existence is universal, and not particular to where are from or what language we speak.

It’s the awkwardness, and soon after humor, found between two acquaintances who aren’t sure if a hug or a handshake is the proper greeting.

It’s the simple enjoyment of a pan-fried piece of bologna on a buttered piece of bread washed down with glass of milk late on a Saturday night.

Or even the realization that in your language the rooster says “cock-a-diddle-doo” while in your friend’s, it says “qui-quiri-qui” and that both are equally ridiculous.

For me, as a foreign exchange student, it’s these everyday occurrences that are so crucial to my interaction and connection to my host family and many others. And, at the risk of stating the obvious, these seemingly inane incidents are the memories on which lasting relationships are built.

For as sad as I am that Cuchufli is now jumping from cloud to cloud pestering the angels, I am thankful for his reminder: that every day, whether abroad or at home, I will be presented the opportunities to make meaningful bonds, over a meaningless happenings, so long as I am willing to reach out to make the connection.