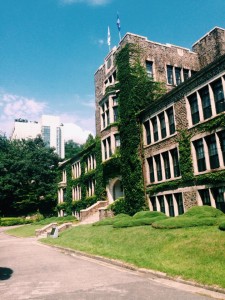 My name is Apryl Jackson and I have chosen to journey off to Seoul (서울), South Korea as an exchange student for a year. I am a junior at the University of Alabama majoring in International Business with a minor in Korean Language. I decided to study abroad my junior year because it just felt like the perfect time to go. Sophomore year felt too early, while senior year would’ve felt too late. I chose South Korea as my destination since I have been studying the Korean language. So what better place to go to learn Korean, alongside business, than Korea itself? Thus, I chose to spend my junior year at Yonsei University (연세대학교; pictured above^) located in Sinchon (신촌), a district in Seoul.

I started my journey off in San Francisco and flew from SFO to Incheon International Airport on August 25th. The plane ride was about 12 hours long, but wasn’t as dreadful as I thought it would be. Time seemed to pass by pretty quickly until about the last three hours. That’s when it began to feel like the time was at a standstill. I was just filled with so much excitement and wonder I wanted to get off the plane as soon as possible. Once we arrived everyone headed towards customs.In the customs line I was able to meet a lot of other exchange students, some of which have become my closest friends until now. Customs was an easy process since I’ve gone through it many times before. All you have to do is have your passport in hand (with your required visa to enter the country) and the customs sheet filled out with all the necessary information. Once you make your way to the official who works within customs he’ll simply ask for your fingerprint, a quick picture, and after a few stamps here and there you should be on your way! Thankfully enough baggage claim was quick. Since we spent most of our time waiting in the customs line, most of our bags had already been circling on the belt and were waiting for us. I had booked a taxi before my arrival so they were already waiting for my friend and I when we arrived. They took us straight from the airport to our dorm which was extremely convenient! I would definitely recommend you plan transportation before you arrive at your study abroad destination, rather than just winging it. The earlier you plan everything the better including plane tickets, passport validity, visa applications, and transportation. You want to be able to have time in case something were to go wrong concerning your passport, visa, and transportation.

Since my arrival I am beginning to realize more and more each day what a great opportunity I have been given. I hope I’ll be able to learn and improve my Korean skills now that I’m basically living and breathing it. That’s my number one goal this year! I hope to also gain a lot of knowledge from the professors whose classes I’m taking at Yonsei University.  My classes are also a lot smaller at Yonsei University compared to the University of Alabama so I feel as if it will be more of an intimate teacher-student learning environment, which I would choose over a 200 person class any day.

Well, classes start today and I’m extremely eager to let all of the exchange student hopefuls back at the University of Alabama know about the class structure and differences in learning at Yonsei University. Also I can’t wait to share with you all my adventures and experiences I make around South Korea this next year abroad!