I have so much to say about the past five weeks that I’m not really sure where to begin.  We’ll give it a go. 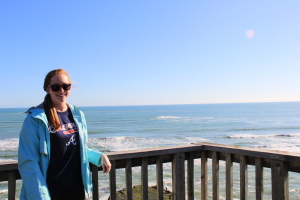 Outside Auckland at Muriwai Beach, complete with stunning views and black sands

I’ve done some more traveling around the Auckland area, mostly, and spent one weekend in the capital city of Wellington.  While I was there, I spent a lot of time wandering around the waterfront, breathing in the salty air by the sea, and a lot of time exploring Wellington’s natural beauties.  After taking the famous cable car up a mountain, I found myself in a wildlife reserve; by chance, I ended up tramping through the reserve with an exchange student from Thailand.  As we kept our eyes open for rare birds and other crawling critters, we talked about all the things we love about New Zealand.  He agreed with me that the people are very welcoming and helpful.  He said that’s a huge difference from what he’s used to, but it makes me feel at home.  It’s almost like good old Southern Hospitality!  I’ve never felt uncomfortable asking for directions or travel tips or for sugar in my tea.

Speaking of tea, I am 100% going to try and making morning tea a thing in the States.  Everyone has a cup of tea or coffee around 10:30am, every day, along with a small snack.  When I told them we don’t do that in our schools, they were appalled.  “How do you make it until lunch??  We’d be starving!”

In the school, I’m now teaching full control all the way.  It feels like a mixture between being completely in charge and completely out of control at the same time.  It’s exhilarating!  We’ve started our songwriting unit and the kids are all buzzing about it:  OKAY I’LL PLAY DRUMS AND YOU SING AND YOU PLAY GUITAR AND THEN SHE’LL PLAY THE BASS AND HE WANTS TO PLAY THE TRIANGLE and so on.  The important part of this is to say that we were working on playing chord progressions.  And I really did have a boy ask me, with the most serious look on his little face, if he could play the triangle.  “Miss Justus, are there triangles available?”

I will admit that the first two sessions of the introductory lesson were pretty rough; however, now that I’m teaching the same lesson for the ninth and tenth times, I’ve got it pretty much down to a science.  Then on Thursday I’ll start over with an all new lesson on choosing a song topic and writing lyrics.  I’m sure the first lesson or two will flop, just like last time, but I’m learning quickly how to adjust for each class’s needs.

There is a two-week school holiday coming up in one more week.  I’ve booked my flight from Auckland to Christchurch, where I’ll meet up with another pair of COST interns, one of them from Bama as well, and we’re going on a road trip throughout the South Island!  I’m so looking forward to seeing the more rugged side of New Zealand.  I think by the time those two weeks over I’ll be as Kiwi as ever!  Maybe I’ll throw myself off of some high thing or zipline or something.  I’m feeling fearless right now.  Will I pee my pants?  Probably.  Will it be worth it?  Probably.

It blows my mind that I’m halfway finished with my practicum at TNIS.  Six weeks done, six weeks to go in the school, and two weeks of traveling.  I BEG YOUR PARDON, MA’AM.  There is no way that I’ve been here for six weeks.  In this short time I’ve learned so much about teaching, as well as my own abilities as a teacher.  It’s fun to be the boss, and I’m really comfortable in front of the classes now.  There’s always more to learn, though, and I want to pack as much knowledge into my brain before I head Stateside again.  This said, I hope time slows down a bit during the holiday so I can relish every moment while I’m road tripping the South Island!  There are still more memories to be made and I’m determined to be a full-fledged Kiwi when I come home in November!

Things I’ve caught myself saying and doing in the past few weeks that I would never say or do at home:

– When Toni held up a pair of shoes in a shop and said that she had a pair like them, I said, “Oh, have you?” rather than “Oh, you do?”  Word placement is strange.

– I’ve used the word “dodgy” instead of “sketchy.”

– I drink at least 3 cups of tea every day.  I tried to break my record of 4 last week, but got stuck.  Sometimes I switch it up and will have a flat white instead.  Kudos if you know what that is!  Maybe in the next eight weeks I’ll break my record!

– To get the students’ attention in class, sometimes it’s necessary to give them a good, “OI!” instead of saying “HEY!”

– I had a conversation with my host about putting something in the trunk and she had no idea what I was talking about.  In New Zealand, the trunk of your car is called the boot.  (Also, erasers are called rubbers.  Put that one in your pocket.)