Upon first arriving in Berlin, I immediately noticed how safe I felt. Granted, I took five years of German, so my familiarity with the language helped, but the environment of the city itself is genuinely open and welcoming to tourists. It gets dark late, locals speak some English, and the transportation system is very understandable. Before traveling abroad, these things may have not been all that important to me, but I now realize how vital it is to stay in a city with a supportive culture.

The culture of Berlin doesn’t just include being welcoming to travelers. It’s a very relaxed culture, one that encouraged sipping drinks in outdoor 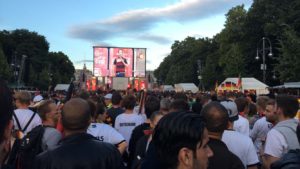 cafes and not rushing to get anywhere (unless you’ll be late; punctuality is quite important). It’s also a culture of sports. During my first week here, Germany was playing an important soccer match, and huge screens were set up in Tiergarten for everyone to come together and watch the game, completely free of charge. I’m not a sports fan, but the experience itself was amazing.

Additionally, the culture of Berlin is one that acknowledges the past but also works toward a better future. When visiting Sachsenhausen Memorial, an former labor camp just outside Berlin, no part of the past was ignored. Instead, our guide pointed out that Berliners strive to embrace it so they can move past the dark times and prevent future atrocities.

Though part of Berlin’s culture is serious, it is still a very expressive one. From street art to graffiti to the hundreds of bear statues planted across the city to show pride in Berlin’s mascot, locals here come 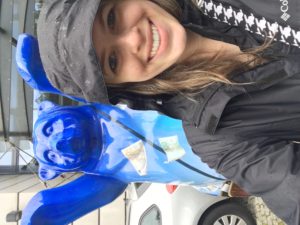 together to create a common culture that I personally would have never experienced anywhere in the United States. I was a little homesick at first, and by the end of my trip I know I’ll be ready to go back to Tuscaloosa, but while I’m here it’s impossible not to enjoy and learn from the culture of Berlin.