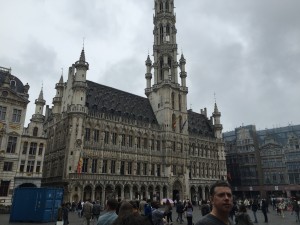 I arrived in Europe with a pretty sour feeling. I was dreadfully tired from not sleeping for 28 hours and my first plane ride was pretty long and tiring, and customs took so long to get through, so it was a crazy long experience, but I was surprised with how amazing it was upon arrival. The first thing I noticed was the lack of fast food restaurants that I’m accustomed to in the US, with the exception of McDonalds, because they are literally everywhere. The only thoughts running through my head at the moment of arrival was nervousness because I was not longer is the US, which is a crazy thing to experience, but it passed as I got use to being here. I didn’t encounter any difficult situations upon arrival, but thats because Gibler(our supervisor) was there to greet us when we arrived, which was kind of a relief. I will say, I encountered a bit of culture shock when no one talked like they did in the US, they all seemed very anti-social…which still holds true. There were a lot of new and interesting things that I saw on arrival, but the weirdest things were the traffic lights, and by weird, I mean they were small. If you blink, you’ll miss them. Also, there are no Walmarts, so thats a huge annoyance. After I got out of the taxi and put all of my stuff in our apartment, the whole group went to the city center of Brussels, also called grand plaza, and that was the first picture I took, and its shows below with all the other pictures.

My favorite thing about the host location are the views. The views are absolutely beautiful, and I mean beautiful. I’ve taken 2 GBs worth of pictures while being here, and there are still many places I have left to go in this country, and I still have to go to Paris the weekend before we leave. One thing I will say, for one weekend, we went to London, and it is the only place I would ever consider staying outside of the US. I loved London. It was the most beautiful city I have ever seen. It has so many of the amenities that I’m accustomed to in the US, but its so much more beautiful. For instance, I took a picture of Big Ben at sunset(below) which is probably the best picture I’ve ever taken in my entire life. The buildings make it special. Everything here has such an old design that just makes it pop, especially when being used to the US. Its basically like seeing all the old buildings in DC, just everywhere here. The thing I miss most while I’m here has to be the food. I’m not one that loves to try new things, so the fact that they only have McDonalds here is pretty sad, although, in London, I did have KFC and Burger King…then I was told by our trip Supervisor that no one has ever done that, so I felt pretty special.

Taking classes abroad here is pretty similar to the US. Our teachers are Dr. Gibler, who teaches at UA, and Erin Little, which is his TA, so classes here are no different than at UA, minus the no Wi-Fi in the class, that is kind of annoying. I have 20-ish other classmates, most of which I know the names of, but the ones that stick out are Shamus, Audrey, Maggie, Seth, and Austin, those are who I generally spend the most time with here….they’re cool peoples. No differences that I can tell. Gibler seems to teach here the exact same way he taught at UA, which is one of the main reasons I chose to take a Faculty-led program, because I’d rather no deal with a language barrier or anything of that sort while in class. I haven’t had to make any adjustments because I take class the exact same way I do in the US, the only difference is that I have to walk a tad bit more here. Its still amazing seeing all of the sights here.

Well, we’ve taken 4 trips out of Brussels so far, and Paris is the final one, next weekend. So far, we’ve been to London, Brugge, Amsterdam, and Berlin. London was by far my favorite, mainly because of how homely it felt to me. While we were there, we got to tour parliament, see Big Ben, so in the Shard, take a boat ride, see London Bridge, see the Palaces, etc. It was probably one of the greatest experiences I have ever had, and I would 100% come back to that city again. On that trip, the entire class came with us because it was a trip included in the cost of everything. Next, we went to Brugge, which was a beautiful city. Its basically a very old, mid-evil style city, and it was absolutely beautiful. The whole class again attended this trip because it was one that was already paid for. Next, we went of Amsterdam and Berlin, which is was just Shamus, Audrey, Maggie, and I. We chose these cities because of the historical significance of Berlin(I saw the Berlin Wall:p) and because we had to see Amsterdam(which we plan on going back). I’ve honestly enjoyed the excursion weekends more than I’ve enjoyed Brussels, and I enjoyed that place a lot! I honestly can’t wait to experience London now! Also, I’ve had Starbucks in every city I’ve been in, and its been great!

Well, as I mentioned earlier, its rather difficult to meet new people here because they aren’t that open. I’ve meet a few people, like this guy named Thiago, and a girl named Dedalie, but other than that, not really. They aren’t very social even if you try to be social with them, so we all attempt to stay in our class groups to avoid the locals like they avoid us. The people that we have meet seem very nice and welcoming, and they love Americans, even though they all consider us to be arrogant and loud, they still enjoy us. The major differences between us and locals are their language, which, of course, isn’t English, and their personalities. All of us on the trip have a very “American” style outgoing personality, while the locals have a quite, “reserved” personality, which can get annoying. They all seem unique, I mean, but its because they are foreign. Even in Brussels, they seem very stereotypical French, quite, reserved, etc. There isn’t much to them like there are to Americans.

My host country, Belgium, has three official languages, French, Flemish, and German. French is the one spoken in the region I’m in. I’ve faced one language barrier here, and that was at the train station when the guy knew no English, but other than that, most everyone here knows English quite well, even the fast food workers, they still end up knowing English, but thats because its almost a requirement to learn it here. The only misunderstanding I can remember are when you say fries. When you say fries, they don’t give you french fries, they give you some weird fried food, which is kind of crazy, so you have to say Frite. I’m not attempting to learn the host language because I’ll only be here 3 weeks and there isn’t a point. I know common French phrases, and they know English, so its easy to get by. I haven’t heard any unique phrases here, except at Starbucks, which a latte here is not he same as one at home, but other than that, no. There isn’t any language quircks here because they can speak English.

I see a lot of great and unique buildings and roads. I see a lot of unique people that enjoy living here almost as much as I enjoy the US. I see quite and reserved people that seem like they are judging your every move as well. I taste a lot of Italian food, because they are big on that here. I taste a lot of bottled water because they hate giving tap water here for some reason:(. I hear a lot of French spoken all around me and not being able to understand one word of it, which is kind of insane. I also hear a lot of LOUD, and I mean LOUD, sirens on ambulances and police cars. Its rather annoying. I smell a lot of fresh air and great-smelling food, but thats because we live next to the tourist-y food district, which is fine by me. I feel a lot, lot, lot of concrete. They love concrete and glass here and hate plastic. Even water bottles are glass, which I feel can be more dangerous than plastic, but its their option. It just takes some getting used to.

I’m getting all my foreign affairs in order as I’m getting ready to go home. Trying to get things packed up, class work done, etc. I’m trying to get all the little things together so that when August 3rd comes, I’ll be ready to head back to my home:). I’ve gotten a lot of shirts, magnets, postcards, etc that I can’t wait to take back home and give to family. I’ve taken hundreds of pictures and video that I can’t wait to show off to my family and I know they can’t wait to see them. I’ve having a lot of thoughts and feelings, but the main one is the feeling that I can’t wait to go back. I’ve loved Europe and what it has to offer, but I cannot wait to be back where I belong. I’m a little too American to be here, and even though I’ve enjoyed it and had the time of my life, I can’t wait until I step foot on American soil. Not really, its just a lot of walking that seems time-consuming, but its the same way at Alabama. Nothing has changed since I’ve arrived other than the fact that I’ve gotten closer to the group. I still can’t wait to hang out with these people in the US.