I’ll be the first to admit that I am, by far, not really a sports person. I know, I know. Why choose the University of Alabama if you don’t watch sports? Well even though I don’t enjoy watching the games, I really love the atmosphere it creates when an entire group unites around something. Whether it be a college, a state, or a country coming together. The Copa America soccer tournament this year caused that feeling for the country of Chile.

I feel incredibly lucky, to have studied abroad in Santiago, Chile, while the country competed in the Copa America finals held in their own capital city. Even the days leading up to the game were full of hype that, dare I say, surpassed any Alabama tailgate I have seen. Our group, though not Chilean ourselves, was swept away in the excitement. The night before the game we left our hostel to buy Chile gear. Most of us picked out souvenir Copa America scarves that were both practical and patriotic. Others bought face paint and capes made of the Chilean flag.

Then came the game itself. It was tense, but ultimately uneventful as nobody scored for all of regulation time. Then overtime. My most vivid image of the game is a Chilean native in our hostel kneeling on the ground and beginning to pray as the game moved into penalty kicks. His national flag was draped on his shoulders, and he was all but crying. Two friends knelt beside him. 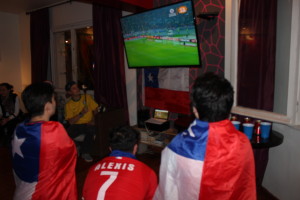 Praying for a Chilean Win

I don’t understand soccer, but I understood this final, emotional segment of the game. Kicker vs. Goalie. Chile scores: Good. Argentina scores: Bad. That much was straightforward. But I didn’t understand the emotion. It was just a game, wasn’t it?

Less than ten penalty kick attempts later, the man in the hostel leapt to his feet, whooping and crying in turn, but still clinging to his flag. Our professor shouted and punched the air. The entire common room of the hostel exploded in noise. VIVA CHILE could be heard above most of the other sounds on the streets outside. Without thinking, we all spilled out of the front door, stampeding towards a central plaza in the city. We were shouting. We were showering Chilean citizens, other tourists, and each other with confetti. The language barrier was shattered; ecstasy is universally understood. Standing in the plaza that night, watching a mob of locals steam in to celebrate I learned it was Chile’s first ever win of the tournament. I saw a nation that suffered and divided itself in the 70’s and 80’s coming together to celebrate this one very important thing. And I realized that while I still don’t like sports, it’s not always just a game. 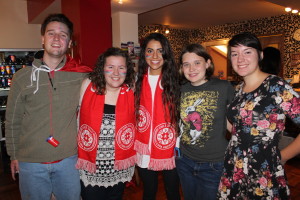