…do as the Bavarians do.

I was only in the Free State of Bavaria for three days and four nights; but in that short time, I was able to see and experience much of the Bavarian culture.

Upon our arrival in München, we were almost immediately thrown into the depths of Bavarian culture. We went to the Hofbräuhaus, also known as the largest bier haus in the world. It was a lot to take in at one time, from the traditional music being played by the oompah band to the downright unbelievable number of people sitting in this one restaurant. I wasn’t sure it would be possible to feel comfortable while squished between two of my new friends from the University of Alabama at this twenty-foot long, but it happened sure enough. I felt as if I was apart of this community as I sat in a room with 1,299 other people, as I sat there eating my roasted half chicken with potato salad while listening to the music and enjoying the music in the background. That was when I fell in love with Bavaria.

The fun only continued throughout the next few days. I took a bike tour with the group throughout the city of Munich, which brought us to many different and interesting places. At Odeonsplatz, we rubbed the lion heads outside of the Residenz building and were given a history lesson revolving around the location’s importance as a center for political demonstrations. Our tour guide, named Tony “the lion,” also took us to the Englischer Garten, which is larger than Central Park. Here, we witnessed thousands of people sitting out on the grass on a Saturday afternoon. Tony presented a once in a lifetime opportunity while in this park to “float” down the Eisbach, or ice brook, like the locals do. At first, I was skeptical. I let the idea sink in though, and realized I would never been in the same place with the same people ever again. Needless to say, it did not take much convincing to jump in this stream in a sports bra and Nike shorts. Tony wasn’t kidding when he said it was cold as ice water. Within moments of jumping in, my entire body was tingling from the drastic difference in temperature. My adrenaline was also pumping faster than it ever had been as I was carried down stream… that is saying a lot considering the fact that I went skydiving last summer. I wasn’t able to go for a second round, but I definitely do not regret going the first time. As we continued on the tour, I heard a repeat of the music of the oompah band from the previous night. If you followed the noise, it led to “happiness.” Happiness is also known as the Chinesische Wirtschaft, the second largest biergarten in the world. Here, we ate our lunch with up to 7,000 others and I felt just as at home as I had at the Hofbräuhaus.

We were lucky to spend some time in the small, southern town of Hohenschwangau. As we took a bike ride through the German countryside and the forest next to the Bavarian Alps, it almost felt as if we were in The Sound of Music. It definitely sounded so, since we couldn’t resist singing a few of the songs. A few of us even took the chance take a swim in Swan Lake. There wasn’t a swan in sight, but I could see both the Neuschwanstein and Hohenschwangau Castles. With the mountains in the background and the countryside before me, it was the prettiest place I had ever been lucky enough to see first hand. We also took a hike up the mountain to get to Mary’s Bridge for the perfect view of Neuschwanstein Castle and to take a tour of the palace itself. It wasn’t the easiest trip to the top, but it was 100% worth it.

I wouldn’t change a single moment spent in Bavaria. I never felt so comfortable in a foreign place in such little time. Three days and four nights was nowhere close to long enough time, but it only means I have to return in the near future. So, I will be back for you soon Bavaria. 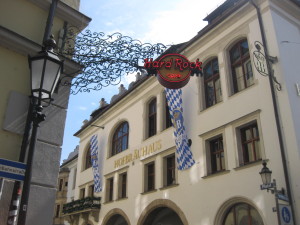 Why go to the Hard Rock Cafe, when the Hofbraühaus is mere meters away? 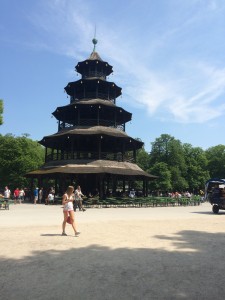 The turm (tower) at the Chinesische Wirtschaft. 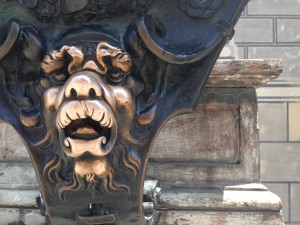 One of the lion heads outside of the Resident building at Odeonsplatz in München. 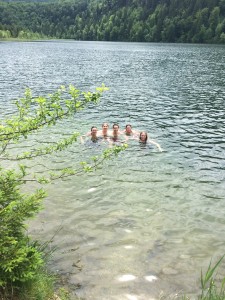 Taking a swim in Swan Lake! 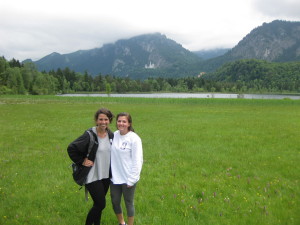 Ashton Reaves and me hanging out in the German countryside of Hohenschwangau. 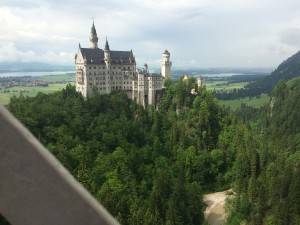 A view of the Neuschwanstein Castle from Mary’s Bridge.