The semester is winding down and I can hardly believe it! It seems like yesterday that I was packing up to travel here, four months ago.  I have met so many people within these four months, it is hard to wrap my head around it.  So, in order to make the most of what little time remains, two of my roommates and I decided to party together while we can.   Italy has an event for international students called “Evento Nazionale”, where international students throughout Italy go to a small town for three days and nights.  Evento Nazionale is held so that people can meet together and meet new people who are not Italian.  Vivian, Kelly, and I decided that this would be perfect for us.

It was a lot of fun.  I met many people from across the European continent and a few places across the world.  I roomed with three Ecuadorians in our two-room place.  Although I no longer took Spanish,  I remembered enough to introduce myself and get to know them a little bit.  They helped me relearn some Spanish while I helped them in English, though their English was better spoken than most there.  The town where we stayed was very small; it contained only one supermarket, a water park, and the hotel where we were staying at.  We were not even two minutes away from a rocky beach, where the event organizers had setup a stage for some music.  The locals were nice, and their English was well spoken.  I tried to practice my Italian with them, but they are hard to understand.  In Italy, the North speaks the standard Italian, while the South speaks in many different dialects.  Also, the Southern people speak more with their throats, creating weird pronunciations and accents that make it hard for even other Italians to understand occasionally.

For those three days, we hung out with people from Cattolica, but also got to dance and eat with those from the surrounding universities, mostly from Politecnico.  We met many people who traveled from Turin, Rome, Florence, Venice, and other cities in Italy.  One of them was from Rome, and he was one of the Italians who helped organize the international students to get to the event.  He spoke English very well, but when we tried practicing our Italian with him, he spoke in his home dialect, which none of us know.  So we spent a few minutes trying our Italian skills, only to end up no further than saying how the weather was.  He showed us how to say different things between the ‘standard’ Italian and his dialect.  I cannot remember any of the words he told us, but I remember feeling confused and amazed at how there could be totally different words and phrases for the same thing in a small area.

The trip back was difficult, not only because of the ride to the airport at 3 in the morning, but also because we had our finals waiting for us in Milan.  We had not studied very much during our weekend adventure, so we knew it would be a hard time to study in the short time we had.  But it was worth spending the little time left with my awesome roommates.  Sole, Mare, EVENTO NAZIONALE!! 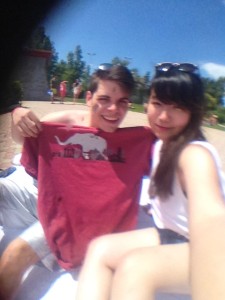 Vivian and I going out for a tan. 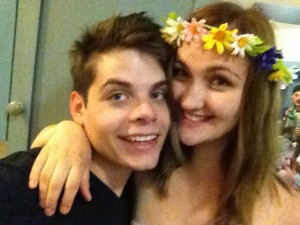 Kelly and I prepare for Hawaiian night at Evento Nazionale. 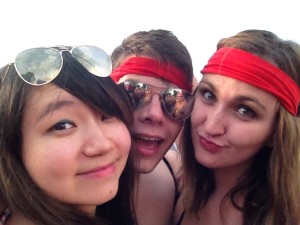 The gang on our first day at Evento.