Coming back to the United States from Cuba has definitely been a culture shock, more so than I had anticipated.

One of the weirdest things was turning off the part of my brain that uses Spanish that had been exercised every single day in Cuba. Even now, less than two weeks since my arrival back in the US, I feel like I have backslid so far in my ability to speak and read Spanish. Other habits I had developed because of the language barrier have popped up since I have come back as well. For example, I often just laughed and pretended not to know Spanish when trying to get away from an unwelcome advance or to avoid questions that I didn’t want to answer. This doesn’t work so well in Nashville because everybody is expected to speak English.

Along the same lines, seeing signs and advertisements in English has been sort of eerie, but really seeing any advertisements at all has been the strange thing. In Cuba, there were maybe ads in the grocery store or a billboard might advertise a trip to the beach, but that was it. Most billboards had public service announcements or supported the revolution. Instead of seeing movie stars or musicians all the time, I saw the faces of leaders of the revolution or of Cuban independence. In general, people in Cuba seemed to know a lot more about what their (and our) governments were doing and have done.

Other things took some getting used to, like driving or using the internet (especially social media). I would love to go back to Havana sometime, especially without some of the restrictions that I had because of the school program, but right now it is nice to be home. 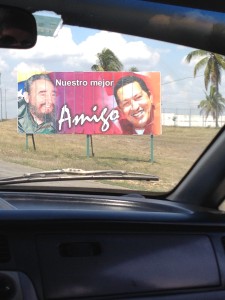