Stephanie studied for a semester in Amman Jordan: check out this program on ISA’s website!

What caused you to choose Amman, Jordan as your study abroad location?

I wanted my experience abroad to be a learning experience! For me that meant somewhere as different as possible from my home in the U.S., which really drew me to Jordan. Jordan is at the heart of the Middle East and maintains an interesting position as being pro-Western and a very important ally to the U.S. while also maintaining a pro-Arab stance. I was intrigued by how a small country without any valuable resources and surrounded by conflict-ridden countries could maintain peace. I was also interested in the fact that Jordan is essentially the birthplace of three major world religions. As someone pursuing degrees in political science and Arabic, Jordan couldn’t have been a more perfect location.

Would you recommend this program to other students? If so, why?

I would recommend this program to someone looking for a really unique experience.

You will learn so much about yourself and your own values and culture when you travel out of your comfort zone. You don’t have to know any Arabic to go to Jordan, but to someone who does study Arabic I would highly recommend Jordan in particular because you will learn a more widely spoken dialect of Arabic. I am a huge advocate of study abroad programs in less-traveled countries. A lot of Americans have misconceptions regarding travel to the Middle East. I guarantee you can have just as much fun studying in Jordan as you would in Europe! Plus, who doesn’t want to see Petra or ride a camel?

What was the most important lesson you learned while abroad?

I learned a lot about myself, my culture and my values while I was abroad. There were things I loved about Jordan, like the abundance of cafés and the fact that people sit down for hours to enjoy time with an old friend. That’s something I definitely take for granted here in the U.S. and I find it impossible some weeks to just slow down and take a moment to breathe. Jordan holds a big part of my heart – I spent the best and happiest four months of my life there and it will always be such a special place to me. I can’t wait for the day I get to go back. But ultimately my trip taught me how much love I have for my home country. Jordan’s political relationship with the U.S. and learning more about that while I was abroad taught me how important it is to have respect and understanding for other cultures. When we respect another country’s beliefs, culture, and values, it benefits everybody.

Did you ever feel hostility from others because of your identity?

Not so much hostility, but at times discomfort. Most of the time people were merely curious. Gender discomfort was more common in Jordan and is for most female travelers. I can only recall a handful of times I felt judged for my gender and how I was dressed, but that judgment came pretty much exclusively from women. I felt more uncomfortable around women than I did men throughout my time in Jordan. The only time I ever had to cover myself completely was on my first day in Jordan when we went to a mosque. Gender plays an interesting part in Jordanian society, and a whole entire bus will rearrange itself so that a woman does not have to sit next to a man if possible.

What is your favorite memory from Jordan?

I have two. My most vivid memory from my time abroad was standing on top of Jabal al-Qal’a (where there’s an ancient Roman citadel). It was my second full day in Jordan and I was having a miserable time at first. Once you get to the top of the hill at the citadel, you can see the most breathtaking views of Amman’s seven hills. It looks like an endless sea of white houses and I fell in love! My favorite memory from Jordan is when I watched the stars from the top of a rock in Wadi Rum! After taking a camel ride to watch the sunset in the desert and getting back to our campsite, a friend and I hiked up to the top of a rock, put on some music, and watched the stars. I’ve never gotten to do this in the U.S. because I’ve always lived in big cities or near big cities. It was so beautiful that a bunch of us just spent the entire night on the rock. It was such a peaceful night before a day full of exciting four-wheeling through huge sand dunes.

What is your advice to your fellow students?

Step out of your comfort zone! Trust me, you will learn so much and have so much fun when you try new things abroad. Spend time away from your American friends so you can soak up the culture. Take a walk and take in your surroundings. But also spend time with your American friends because they will become lifelong friends that you have a special bond with. Most importantly, realize how short your time abroad really is and make the most of it!Don’t take anything for granted because you’re really going to miss it when you leave.

I had the privilege of volunteering at Palestinian refugee camps and I have to say how important it is to experience more than just the touristy things while you are abroad. These experiences are where you will learn the most. I think it is so important to give back and volunteer and I’d recommend to anyone who is studying abroad to consider volunteering, even if just for a day! 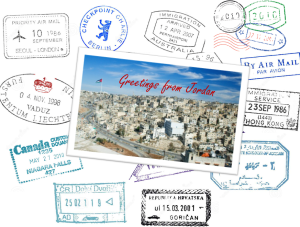